Last week we were presenting our new learning service Mehackit Atelier in Dare To Learn – The Festival for Rethinking Learning. Instead of just explaining its content we wanted to engage the participants in the making of creative technology projects. After all, this is technology education and you can’t get the genuine experience without trying it yourself!

In Dare To Learn, the participants were given a playful task to plan their own creative multidisciplinary technology project. They were randomly given a school subject and one of the Mehackit tracks – Visual Arts, Music and Electronics. The task was to plan a school-project that could combine these two and illustrate it on a painting canvas. The combination could be, for example, “Literature” + “Music Programming”. We got a lot of fascinating ideas as you can see from these pictures. 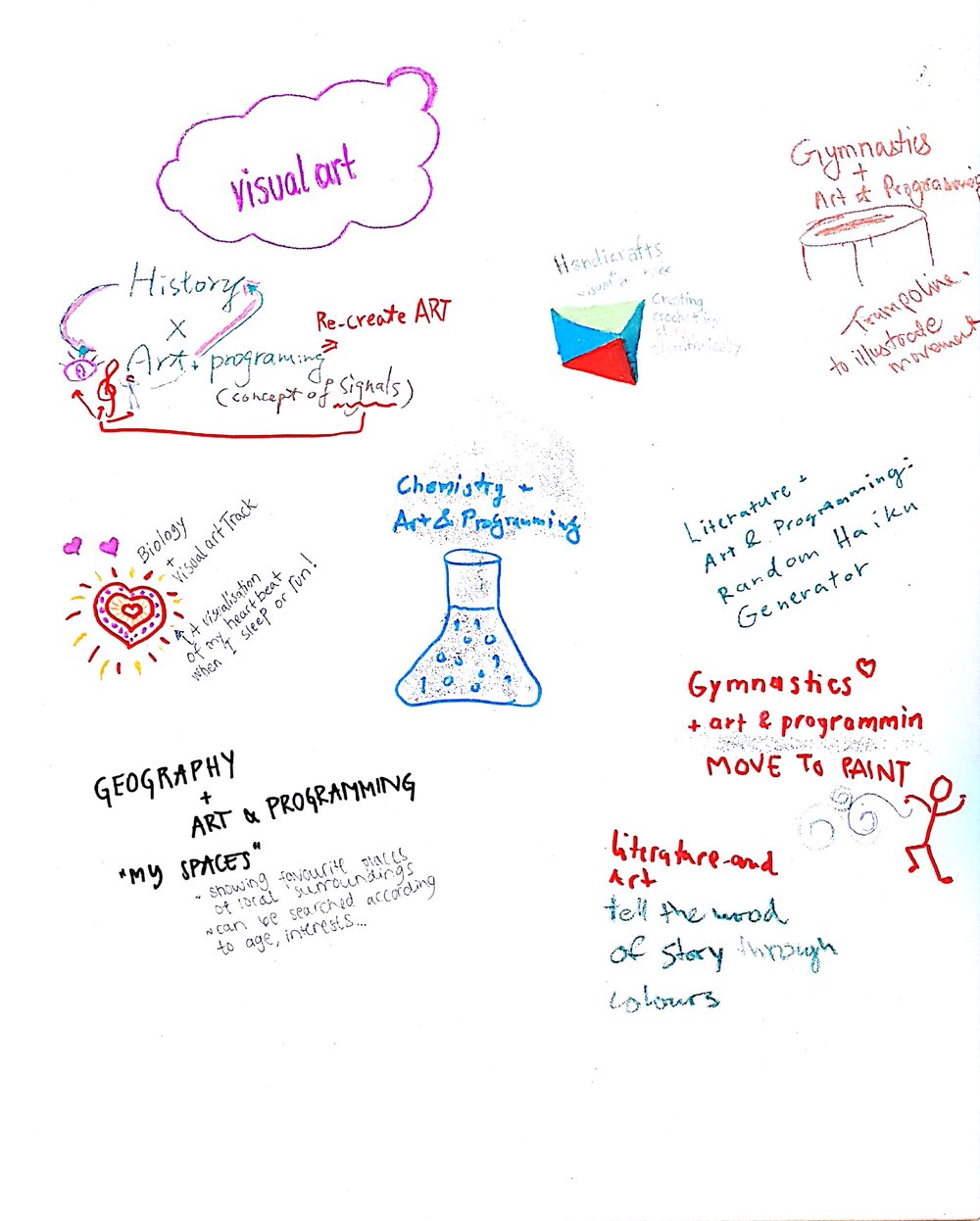 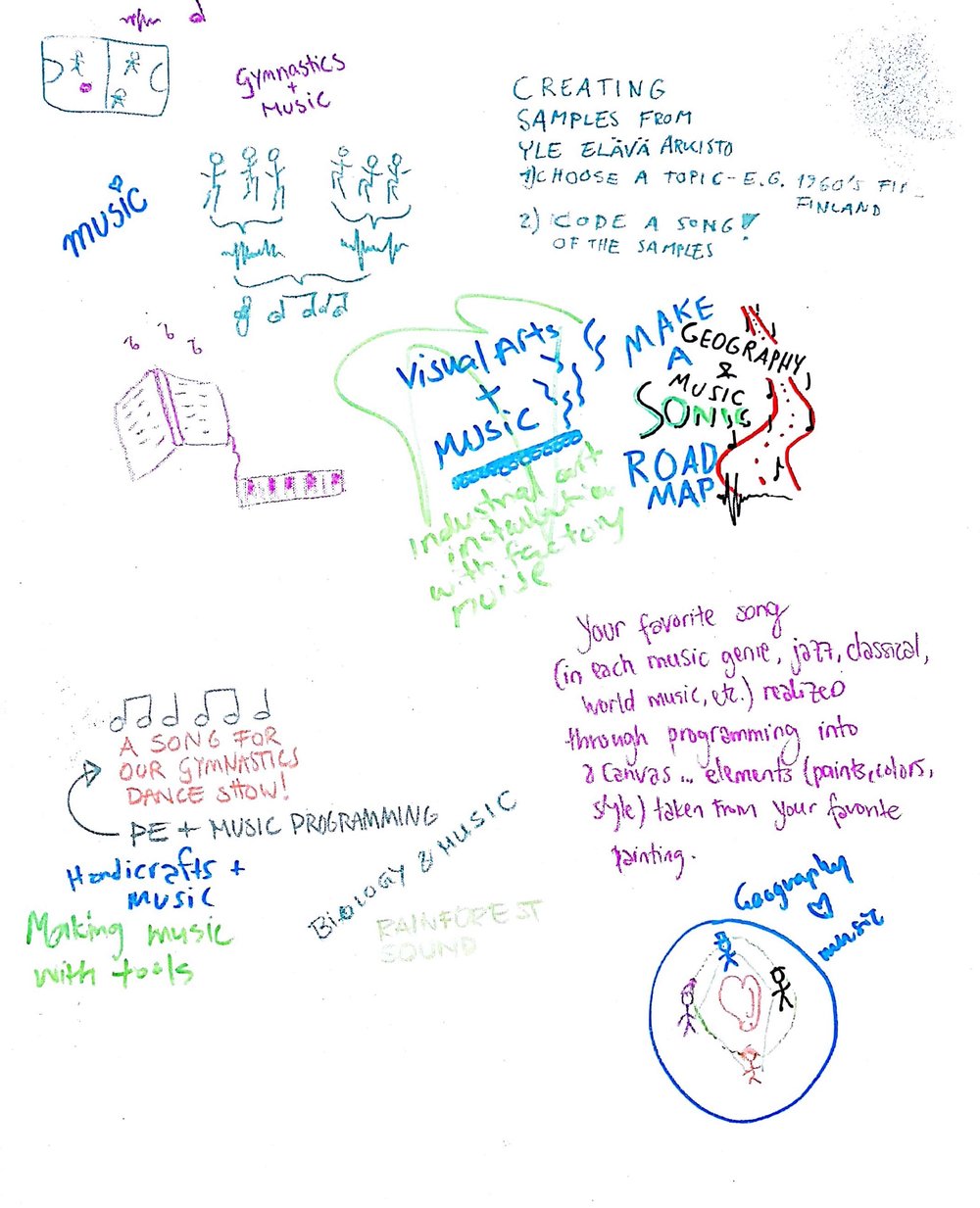 One participant had an idea of combining Gymnastics and Art Programming in a project where students would visualize movement-data. We would need some sensors to detect movement so Electronics and Programming track could be included as well! Another idea was to combine Geography and Music Programming in a project where students would program music based on the styles and genres of different continents. To combine Chemistry and Electronics & Programming, two visitors thought about analyzing chemicals and 3D printing models of their molecules.

When programming became part of the Finnish national curriculum most urgent need in the schools was to have tools, learning materials and educators who could support students with learning the basics. Mehackit has been helping upper elementary schools and upper secondary schools with this mission for the past four years. Although we have focused on teaching the basics to the students, we have done it in a creative and project-based way.

Today, the need for learning the basics hasn’t gone anywhere but at the same time there is an increasing number of students and educators who would like to experience programming from a wider perspective.  In modern national curriculums, technology is considered a part of problem-solving and project work in all subjects – not just in math or ICT. This is an inspiring goal and definitely something that we want to work for!

Mehackit Atelier contains a basic module of all three Mehackit-tracks: Music Programming, Art Programming and Electronics & Programming.. After the Basic Modules, students and Educators can move on to  ProjectModules. We are constantly developing these projects and got a lot of wild ideas in Dare To Learn. Maybe some of these ideas will eventually end up in Atelier! You can find the basic modules here

To make such multidisciplinary projects possible, we provide lots of supportive materials for the educators in Mehackit Atelier. It’s like the good old teacher’s book in an online environment. Besides the actual student’s material, there’s always pedagogical tips and guidelines for possible challenges in the classroom. 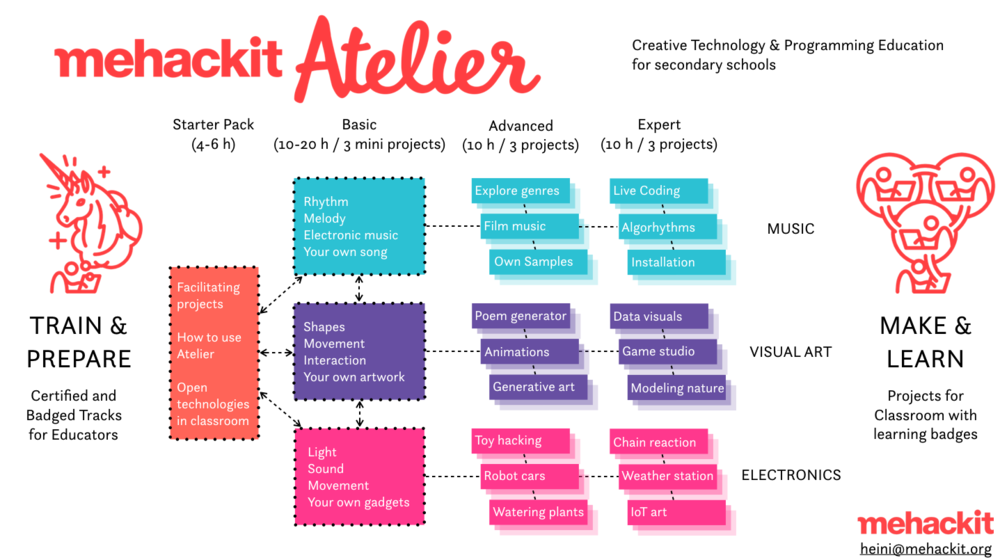